Storing aversive memories is important to survival, as it allows animals to avoid similar stimuli in the future. However, learned avoidance responses decrease over time without reinforcement [1]. Since little is known about the molecular mechanisms behind this fear extinction process, Bengoetxea de Tena et al. evaluated how naive male Sprague-Dawley rats respond to a learning and memory task under fear conditions in a recently published study, which we review in this blog post [2].

In these experiments, rats were exposed to non-reinforced passive avoidance repeatedly for seven months to investigate the process of fear extinction, after which the authors evaluated how gentle handling and a non-aversive novel object recognition test (NORT) affect fear extinction and expression. Additionally, the authors examined the correlation between observed animal behavior and the activation of dopaminergic, cholinergic, and endocannabinoid systems to elucidate the molecular mechanisms underlying these fear processes.

This is the first published study to provide evidence that fear extinction in passive avoidance is a robust process lasting several months. The authors observed a gradual decrease in retention latency in young adult rats who were exposed to a mild foot shock every two months in a non-reinforced manner. After seven months, 33% of animals retained a positive passive avoidance response to this aversive stimulus. To the authors’ knowledge, this is the first time that fear extinction has been measured for such a prolonged period of time in passive avoidance.

Effects of gentle handling and NORT on fear extinction and expression

Figure 1: Analysis of fear response in rat groups after receiving an aversive stimulus, evaluated by (a) latency times, (b) number of stretch attendances, and (c) percentage of freezing time during the retention phase of the passive avoidance test. © 2022 Bengoetxea de Tena et al., licensed under CC BY 4.0.

The authors also studied how gentle handling and NORT affect fear expression following an aversive stimulus, and found gentle handling prior to exposure to the aversive stimulus increased the passive avoidance response. Interestingly, these rats also exhibited active escape behavior, indicating that handling acts as a stressor in this situation and increases fear expression after exposure to an aversive stimulus. In contrast, subjecting naive rats to NORT prior to exposure to the aversive stimulus significantly reduced their passive avoidance response. Although handling is inherent to NORT, the authors hypothesized that interaction with different objects might have acted as environmental enrichment, which has previously been shown to reduce anxiety.

The neurochemistry of passive avoidance

Lastly, the authors studied dopaminergic, cholinergic, and cannabinoid receptor activity to explain how handling and NORT changed passive avoidance response, since there is evidence that the interaction of these systems modulates fear expression. Despite robust evidence that dopaminergic signaling plays a role in regulating fear response, rotigotine, a dopamine agonist, had no effect on G protein-coupled receptor-mediated activity. The authors instead found that cannabinoid signaling is involved in these behavioral modulations: rats who were not subjected to handling or NORT prior to performing the passive avoidance test displayed the highest cannabinoid activity in the nucleus basalis magnocellularis (NBM), as well as the lowest percentage of freezing time (Figure 2). 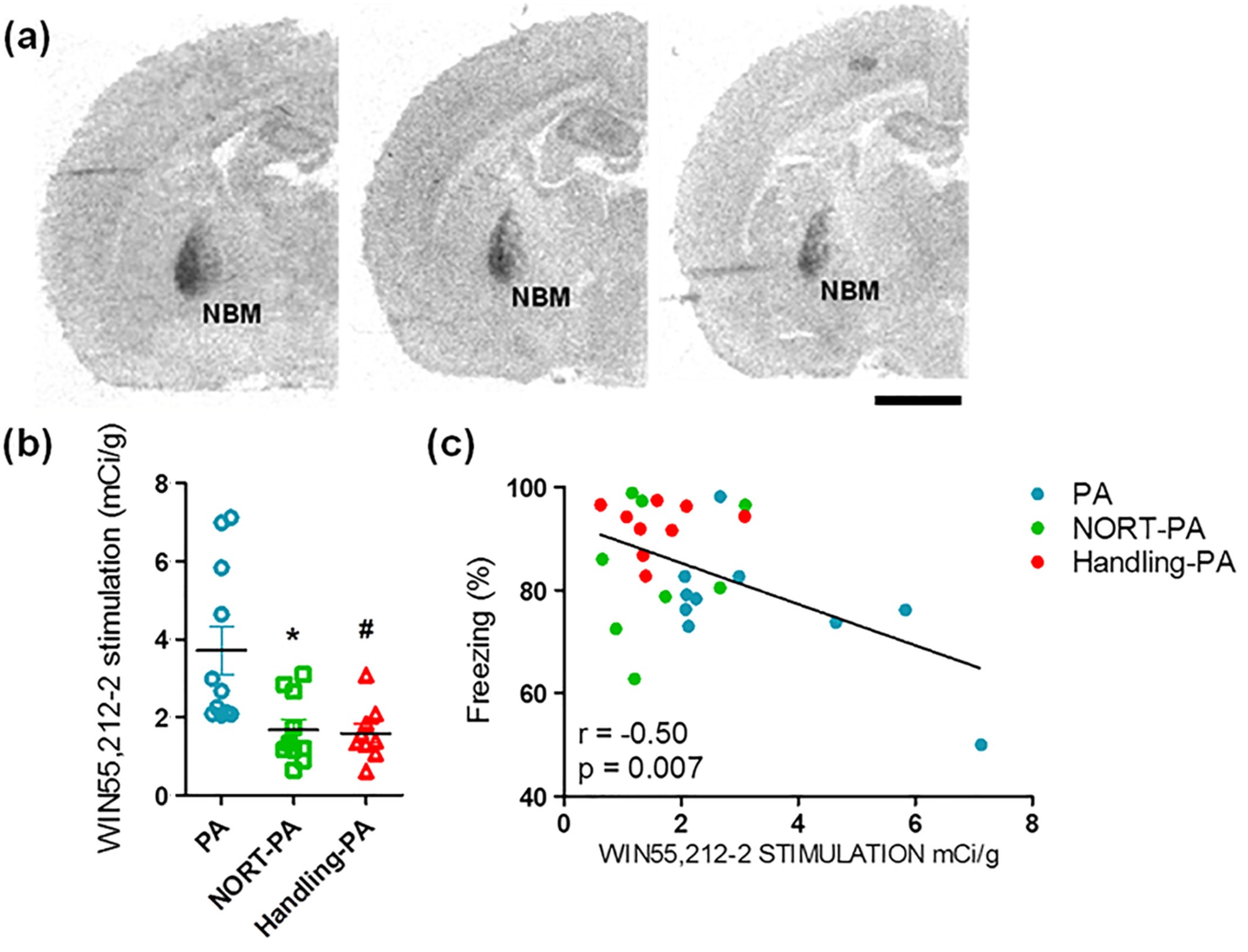 Figure 2: (a) Representative autoradiograms (scale bar = 5 mm) of PA, NORT-PA, and Handling-PA groups in rat coronal sections that show (b) [35S]GTPγS stimulated by the CB1 agonist WIN55212-2 in the NBM and its correlation to (c) percentage of freezing time in the retention phase of the passive avoidance test. © 2022 Bengoetxea de Tena et al., licensed under CC BY 4.0.

The authors conclude that the decrease in passive avoidance response after an aversive stimulus in naive rats is a robust and long-term process. However, it cannot yet be said for certain whether this decrease is due to a learned fear extinction process or due to decrease in memory over time. Nevertheless, the authors were able to show that this decrease in passive avoidance could be modulated through gentle handling and NORT, and also identified the role of cannabinoid and cholinergic signaling in this process. Since these experiments were only performed in male rats, repeating the study with female rats would provide additional insights into the neurochemical regulation of passive avoidance responses.